Welcome contributor Jessica Rodriquez of Take Back Fitness! Lots of people are juicing their way to better health, and Jessica gives a two-thumbs up to The NutriBullet in the following detailed review:

I don’t know about you but I’ve been wondering about the NutriBullet for quite a while. Last year we bought a juicer and I was really excited to start making my own juice. However, it didn’t take long to realize that not only was it a hassle to clean but most of the nutrient rich parts of the fruit were found in the back of the juicer and wound up in the trash instead of in my cup. Not good.

I can’t tell you how many times I woke up to the NutriBullet infomercial – and then watched it like it was new to me. It isn’t promoted as a blender or a juicer. Instead, they refer to it as a “nutrient extractor.” Instead of just mixing together or juicing, it breaks down the cell walls of the food and releases the nutrients inside to make it a superfood. No chunks. No unbroken seeds. No mess to clean up. No need for your body to break down the food as it is already going into your body in the most absorptive state possible. Interesting. I’m a clean eater so anything that promotes the importance of fruits and vegetables in your everyday eating, catches my   attention. The more I watched the infomercial, the more intrigued I was by it and wanted to test it out for myself. 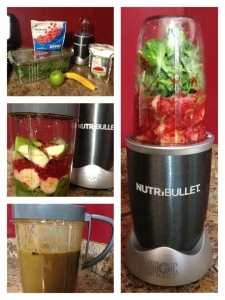 A few weeks ago, I finally got the chance to try my first NutriBullet shake (known as a NutriBlast). I wasn’t sure what to expect but I read through the books provided and was ready to give it a hundred percent. My first shake included spinach, raspberries, an apple, a banana and goji berries. I packed all the ingredients into the 24 ounce cup, just below the max line, added water and twisted on the extractor blade. I then put it onto the NutriBullet base and let it do the work. After a few minutes, it looked like everything was extracted so I removed it from the NutriBullet base and gave it a try. I fell in love! I had no idea how this mix was going to taste, but it was so good! Even better, I wasn’t able to find one seed! I can’t tell you how many times I found myself spitting out seeds from blending my shakes so this was a huge plus for me!

For the first week, I tried a different recipe each day. There are plenty of options in the recipe book, but you are free to experiment so I made some of my own as well. It takes me less than ten minutes to make a NutriBlast which is perfect since that’s about all the time I have in the morning. However, I did find that when following the recipes, you are unable to fit all the ingredients listed (even in the large cup). What I started to do was to only use half of each fruit listed. I then put the other half in a Ziplock bag in the fridge to use for the next day. It’s not a big deal for me, but at first it can be being confusing trying to fit the portions that are listed in the recipe book all into one cup.

As for cleanup, the cups are dishwasher safe but honestly, it’s so easy to clean them and the extractor blade by hand that I don’t even add them to the dishwasher. It’s a nice option though!

The NutriBullet System also comes with a milling blade which is perfect for those who make their own protein bars and granola like myself.  It does a great job breaking down seeds, and I’m looking forward to letting go of my food processor since the NutriBullet takes up much less space. We have a small kitchen so the more space, the better!

Overall, I would say that the NutriBullet is completely worth the cost. I have had it for a few weeks now and love the convenience of it. Each day, I bring one NutriBlast with me to work as my “coffee” and have really been feeling the difference in my energy levels in the morning. The NutriBlasts have also been helpful when having a sugar craving.

If you’ve been on the fence about purchasing one, like I was, take the leap – it’s worth it! Bye bye juicer, hello NutriBullet!

Like Loading...
‹ Pic of the day: Bravo’s Andy Cohen of “Watch What Happens Live” with Horsham’s Bryn Davis
Groundbreaking Research: Fifty Shades of Why Gluten-Free ›

Mission Statement: On Being “Hubworthy”

Horsham Hubs Magazine is a collection of feature articles on healthy living and spotlights for benchmark private and family-owned business serving the Horsham Area. Qualified people who contribute to community wellness and go the extra mile to inspire are also featured. Every business is evaluated according to “Hubworthiness” which are businesses that stand out as benchmarks for excellent services, quality, and products that truly serve the consumer. A Hubworthy business is expert in its field of service, passionate about customer service, and enhances its customers’ lives by delivering dedicated, thorough service at a fair price from vendors who actively care.

We said it here…